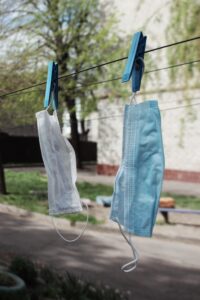 To write a column today without talking about corona is really impossible. After all, it seems as if the whole world has come to a standstill and everything revolves around the fight against the corona pandemic. In one sense it is rightly so, after all, this battle somehow affects everyone in our globalized world. Despite all our efforts, the virus does not care much about boundaries and does not bother with religious beliefs.

The fight against this evil unites us, at least it seems natural that a united fight is crucial. However, a pandemic like this often conveys fine words about common interests, but in practice we find distancing rather than connection. We see this on all levels. The “scramble for vaccines” is happening everywhere and dividing the world in an unprecedented way. Rich countries buy the lion’s share of the tests and vaccines. The gap with the so-called Third World will therefore become larger in stead of smaller. And according to virologists, this will eventually lead to a virus continuing to circulate and mutate, eventually creating another mutation that will also hit hard the rich West again.

Closer to home, people withdraw more and more into the small circle of the family, their own bubble. We look with more suspicion at people who are not part of our inner circle. Vague contacts become even more vague, and our own circle smaller and smaller. Psychologists fear this could have long-lasting negative effects on the community. After all, the other moves out of the picture and our own small circle becomes even more the centre of the world.

Historically, these are the known and understandable responses to pandemics. It happened in the times of the plague, the cholera, etc. In the past, this was often accompanied by the search for a scapegoat. You not only shield yourself from the other, but the other is also blamed. E.g. the Jews in Europe were seen as the cause of the plague. What impact will this pandemic have on contacts between the various groups in the Netherlands? The tendency to blame others also became visible in this pandemic. The virus very quickly became a “Chinese virus”.

During the second wave, more than 50% of the corona patients in the ICU in Amsterdam hospitals appeared to have a migrant background, and have little or no understanding of the Dutch language. PVV leader Geert Wilders immediately commented on Twitter: ‘So treatments and operations of Henk and Ingrid with cancer, heart failure or other diseases are being postponed again because the ICUs are mainly occupied by Mohammed and Fatima who do not speak our language and do not care about the rules?’

It appears that even now a pandemic can easily increase the contradictions, the mistrust between population groups. It is striking that this can also affect the church. Perhaps even more than on our immigrant fellow countrymen, the churches have come into the picture as hotspots. Apparently, they are people who do not obey the rules and do not partake in the social debate in the usual way. On the other hand, there are attempts by denominations and consultative bodies to prevent precisely this reaction. Which then creates the same processes of condemnation and exclusion within churches! Churches, church members who are good and those who don’t care about anything and just let things happen.

The language of exclusion, dividing people into us and them, blaming the other, is a many-headed monster. It turns against every possible minority. It changes direction, but retains its character. At the beginning of our era, Christians were seen as those who were guilty of child sacrifice and drinking blood. Now it can be used by “Christians” against liberal politicians.

Corona crosses all boundaries, but our response doesn’t! It seems that establishing old and new borders is the only answer we can come up with. Doesn’t the pandemic challenge us to reconsider our relationships? It may start with the language we use when we talk about the other. Language matters. It also requires to keep in contact. No matter how complicated that at the moment may be. Also with the migrant Dutch citizen, the Muslim neighbour. We must be aware of behaviour and language that divides, not establishing new boundaries but breaking them down. Perhaps more relevant than ever, now that we realize more than before that we can easily become the victims and not only be perpetrators.

Jan Ouwehand has been active in missionary work and social aid for several years. He is a minister in the protestant Church of the Netherlands (PKN) en after serving the church of Wilnis, he worked as the CEO of the Reformed Mission League, a Missions organisation in the Protestant Church. Since november 2020 he serves as a fulltime minister of the Church of Ilpendam en Watergang, near Amsterdam. Jan has been a member of the board of the ‘The Church in the Context of Islam’ Foundation and has actively contributed to the development of the Chair’s current research project: Inclusion versus exclusion, searching for Biblical inspiration.

Should we wish a ‘Blessed Ramadan’ on our Muslim friends?
Tasting the aroma - by Martijn Leeftink
Can inclusivity go too far?
FacebookTweetLinkedIn