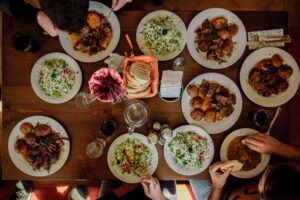 Is it OK in the encounter between Muslims and Christians to explicitly talk about your faith in Jesus and the importance of it?
Het Kruispunt is a Christian meeting center that stimulates the encounter and the dialogue between Muslims and Christians. At the same time we create space for the encounter between Muslims and Jesus (as far as this space can be created, the Spirit goes where she wants to go). With this intention we always have to take care of the right balance. We want to be socially involved with others. For that you should not always be so explicit about your believes. On the other hand it is hard to keep silent about what motivates you and about the importance of God in what you are doing. So, when do you keep silent and when is it impossible to keep silent about the importance of Jesus, also for the Muslims you encounter?

This question came up once again recently. We have a weekly Bible study meeting in Arabic and Dutch. This is of course the place where Jesus ís the subject of conversation. Everybody is welcome to join, also Muslims. One day a young Muslim attended. His Christian foster-parent had brought him. During the meeting a woman told about her experiences as Muslim in her home country. She told how she felt liberated, also as a woman, when she met Jesus. This young Muslim man came one more time and then stopped coming. Asking about the why, he told that he felt offended and hurt by the story of this woman. As if Islam and Muslims are to blame for all the wrongs and injustices in the world, specifically against women. It was clear for him: this place, where Christians meet, is a no-go-area for Muslims.

That’s a pity. For as a meeting center we want to connect people with each other. Especially when they are of different religions. Because it is a good thing to learn to understand each other’s religions. But speaking explicitly about Jesus, as it shows, provokes resistance. It keeps people away. For some diaconal and social projects that is a reason to not talk at all about Jesus and faith. Because we don’t want to hurt and offend Muslims. Our aim should be to help them socially, not to convert them. Right?
But do you do justice to each other, in the encounter with Muslims, when you keep silent about who Jesus really is? Muslims don’t keep silent about what the Quran and who Muhammed is either!

I assume that churches who pursue social and diaconal activities in their neighbourhoods do so to bring people together. And they do so because they want to follow Jesus and spread the ‘Aroma of Christ’. At least this is how Het Kruispunt wants to work in this way. All activities and meetings are within the frame of encountering each other regardless of religion or race. Everybody is free to participate  in whatever activity he or she wants. However, some activities will have faith in Jesus and the bible as explicit subject, whereas others are neutral. You know what you are participating in.

What is important in all activities, is to make people feel really at home. To offer a place where people are being heard, acknowledged and appreciated as human beings. Without first having to preach against them. The space that will open up as a result, creates security, trust and safety. When these conditions are met, and people are not objects for conversion, they will come and tell their stories, to which we listen. And because of this secure and safe home-setting, there will become room for God’s story becoming part of their story. In that way Muslims, who have a lot of prejudices against Christians (which by the way is true the other way round. A reason for many not to get involved with Muslims anyway) will learn that this place where Christians are, is really a good place, beautiful, secure and honest. A place without pressure and where you can be yourself. That is because by dealing with the other in love and respect, the aroma of Christ is ‘hanging in the air’. We let them smell who Jesus is.

One of the characteristics of aroma is that one either feels attracted by it, or repelled by it. The latter is, by itself, not necessarily a bad thing. After all, there is no compulsion in religion. But when you spread the aroma, and people are attracted by it, what’s next? People get appetite. They start longing for more. They become curious for the source of that aroma. Will you let those people hunger, or is it ok to invite them explicitly to the place where the source of this aroma is being served?
It is great, when we, as a Christian meeting center, through our activities spread the aroma of Christ. Many Muslims really like this aroma. They are taking in the stories of Jesus and the prophets, and often ask for more. But will we have something more to offer them? Or will we send them back with empty stomachs?

For that reason we seek the balance by always having a place where dinner is served (often literally and then always halal). Available for anyone who wants to taste the good news of Jesus. We invite people for that meal. We find that important. Because when you only spread the aroma of Christ, but don’t offer the food, you’re doing the wrong thing.
Where there is odorless cooking, people won’t get appetite. But where there is no meal available, the spreading of aroma doesn’t make sense. There must be ‘tasting the aroma’. Because the meal ánd the aroma of Christ come hand in hand!

Martijn is as a pastor for mission connected to Het Kruispunt in Rotterdam, on behalf of RijnmondMission. Het Kruispunt facilitates the encounter from heart to heart between Muslims and Christians.
Martijn studiesd theology in Kampen (Broederweg) and Beirut (Near East School of Theology), lived for 8 years in Damascus. He is married to a Syrian woman and together they have three children.

TIME FOR ANOTHER LANGUAGE
Explicitly inclusive - by Jan Wessels
Can inclusivity go too far?
Facebook0Tweet0LinkedIn0